After a week of testing, BW Founder Sarah Rafael García taught 1-class period workshops at Santa Ana High School in Santa Ana, California under the theme "Mexican-American Studies through Contemporary Literature." She was hosted by an empowering high school teacher (History & Ethnic Studies) whose goal was to influence her students through creative writing—Yay for Mrs. Carah Reed!

For the next few weeks we will be featuring Mrs. Reed's students on our blog! During the workshops the youth read, wrote and shared as a community (60 mins: 20-reading, 20-writing, 20-sharing). Focused on diverse U.S. Mexican-American narratives, they read and discussed works by U.S. Poet Laureate Juan Felipe Herrera, Ariana Brown, and Barrio Writers Lala Castillo, Marilynn Montaño and Illoheem.

After reading, they were asked to respond to a writer by doing a "response piece" or writing their own poem/story/personal narrative in similar style as the writers read in the workshop.

After writing, all the students were offered the opportunity to share their work and receive feedback from their peers. They were also invited to share on our blog!

Today's piece is by Juan Zúñiga, he created his own response through freewriting!

Freewriting: often done on a daily basis as a part of the writer's daily routine, usually for 5, 10 or 15 minutes. Write without worrying about spelling, grammar, or making corrections (revisions or editing). It’s one way to reduce writer’s block and develop a natural voice. If you reach a point where you can’t think of anything to write, then write that you can’t think of anything, until you think of something else to write.

What makes Juan's words empowering is that he uses his own name to create thought and give us insight on his personal narrative in the U.S. He helps us relate to him, while we think of the importance of his name and presence in the U.S. Here is Juan's piece:

The name is Juan Zúñiga,
not Zuniga.

The "ñ" is a piece of my tierra,
a sign that tells people "He's Mexican."

It's a letter that exists in México, not in the U.S.A.
It's a piece of me that U.S.A. tries to take away.

"No," they say that letter is not worth anything here,
because here you are Zuniga, nothing more.

But guess what, that letter is in me,
running through my veins—untouchable.

My I.D. says Zuniga, but my blood says Zúñiga. 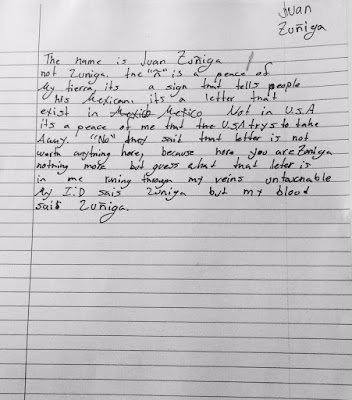 We keep this blog updated with writings from our young writers along with updates on our program and cultural art events!
If you are an aspiring writer between the ages of 13-21 years old, you are welcomed to submit your writings to us. We enjoy sharing our space with you and encourage everyone to share their words too. Just email us at barriowriters@gmail.com.